There seems to be a bug in the reputation list: 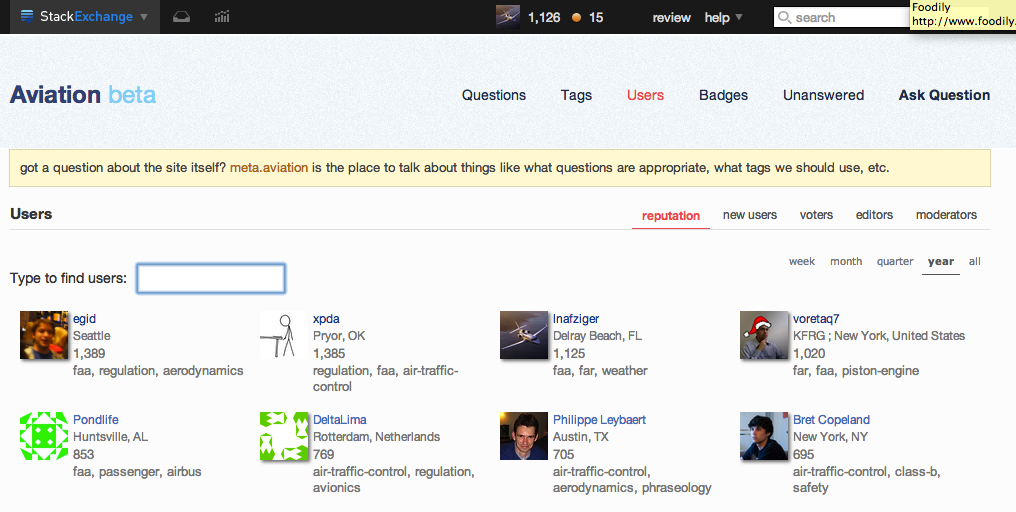 The site has only been active a little over a week, and looking at the last year of activigy, I have 1,125 reputation earned, but at the top you can see that I have 1,126. Every person in the list is the same way (egid has 1,390 if you click on his name, etc.).

It is the same on month and quarter, but if you click on all it shows the correct values.

Every user has one reputation point upon creation, presumably this is earned at the dawn of time as far as the database is concerned, or possibly never "earned" (?).

As a result until the site's age passes each of the temporal windows you can select (week, month, quarter, year) there is an off-by-one error in the rep reported.
(Right now "Week" is the only one behaving "correctly" on Aviation, showing the last 7 days of earned reputation. Because our site is more than 7 days old and the 1 mystery point is outside the window it looks at).

For some users, including myself, the association bonus isn't counted for some reason. It must be a race condition based on when those values are first calculated for each user, but I can only guess as to the specific cause. The temporary solution is simply for reputation to be recalculated on the affected users, and there's a relatively easy way to do that. I tried this on my local development environment and it automatically corrected my rep, so I'll talk to someone about getting that fixed in production. Perhaps someone on the core team will also have an idea as to what's causing it in the first place.

The rationale for why the starting 1 point is not included is that it is not really a reputation point, it's simply a minimum value and what our reputation counter starts at (instead of zero). It has no date associated with it - it's not even in the database - and therefore isn't considered part of any date range.

How come my association bonus didn't count towards the league, but someone else's did?

Up to now though, the bug hasn't been answered.

Not the answer you're looking for? Browse other questions tagged bug users reputation .