What explains the enormous difference in reception between these similar questions?

I ask to seek kindly advice and recommendations on improvement.

These 2 open questions Pilot passed out in a small GA plane. What can a passenger do? and Can a passenger realistically replace suddenly incapacitated pilots? have received many upvotes and views, but my original was closed and criticised. What might I have neglected?

Disclaimer: this is my opinion as a user of this site, not as a moderator. I did vote to close yours as opinion based for a few of the reasons mentioned below.

There are a few things I can spot right away:

I think it boils down to: your question was more complicated to read. Many vague questions make for an opinion based response, which is probably why five users voted to close.

I dumped your question into the excellent Hemingway readability app and it highlighted 8 of 10 sentences as "hard to read" or "very hard to read": 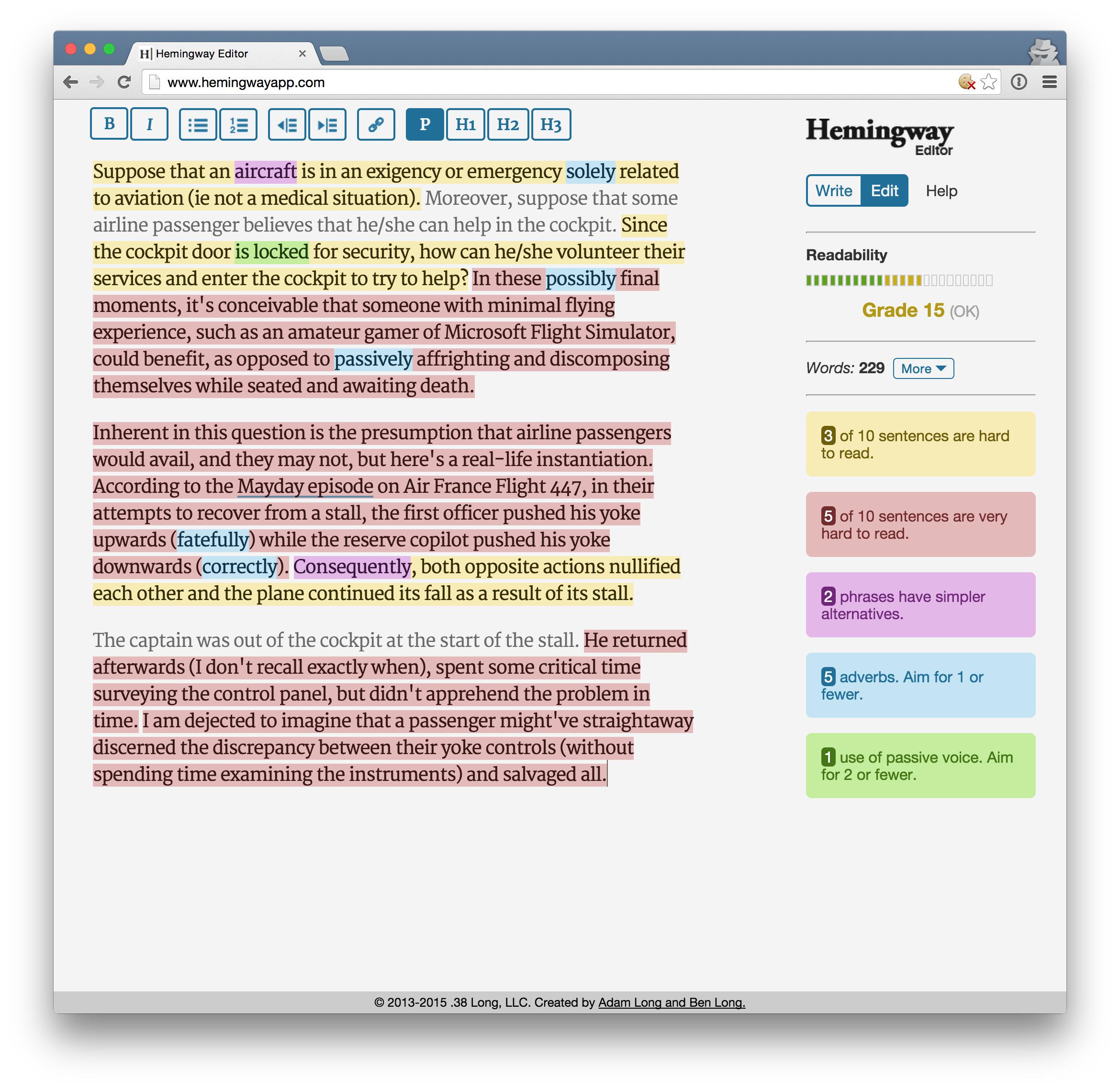 The GA question, on the other hand, was pretty straightforward: 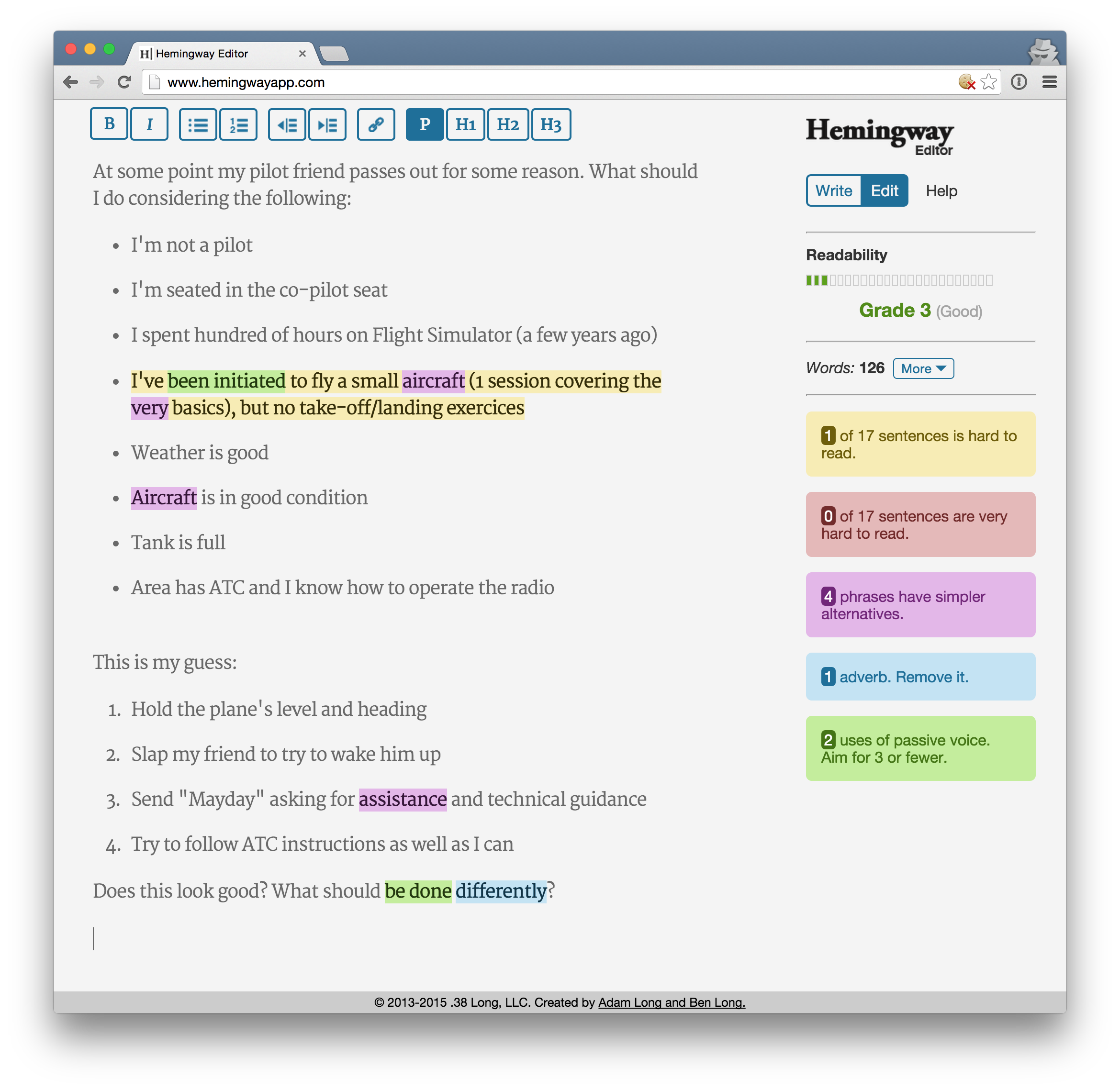 In addition to writing style and the question being very broad, I think a lot of the negative reception also had to do with the assumption that a passenger with no actual flight training would be useful to the flight crew of an airliner. It's roughly comparable to asking "When a patient starts having complications during spinal surgery, how can a hospital visitor who has surgery experience from playing Operation enter the operating room to help the neurosurgeons?" The answer, of course, being that they can't because they'd have no idea what's going on and they'd be a distraction to the highly-trained people who are trying to figure out what's going on and fix it.

In the case of AF447, it's unlikely that the passengers even had much idea that something was wrong prior to impacting the water. Even a trained pilot probably wouldn't have known that anything serious was going on unless they happened to be monitoring a GPS unit at the time.

Asking if a passenger could be useful to the flight crew in a specific type of emergency probably would have been better received, since it's specific and doesn't start with the assumption that the passenger actually would be useful. Making the assumption that someone with no training would be able to fix a problem that people with several years of training couldn't comes across as arrogant, though.

By the way, I hope this answer does not come across as being offensive. No offense is intended. I'm just trying to give an honest assessment of why I think that question was not received well.

You are comparing two different situations:

The closed question may have contributed to the rejection reaction in parallel.

Not the answer you're looking for? Browse other questions tagged discussion closed-questions .

9
Experimental self-evaluation
1
Practical, or theoretical - which do we prefer?
12
Is it appropriate for an OP to substantially change a question?
15
Can we please leave contructive comments for our new users, instead of simply downvoting?
6
What's the difference between [sailplane] and [glider] tags?
5
Why are question with bounty not closable?
0
Why is 'What is the difference between slice, segment and leg" on-topic while "What are the definitions of stages/sequences" was closed as off-topic?