Why are the comments being misused by established users?

Yes I'm putting myself in the firing line. And the purpose of this is not to call any one out.

I came across this: 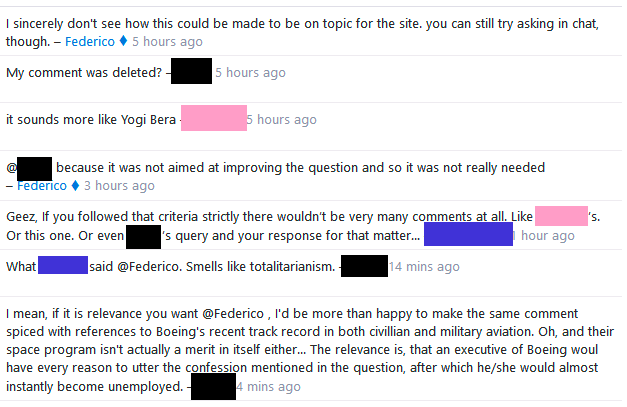 It really boggles the mind. The Hangar is collecting figurative dust, and is being nudged back to life every so often.

All the while comments are being misused for social fun, adding noise, and making the ever faithful bot's job harder. And the how dare the moderator's carry out their tasks keeps resurfacing.

What gives? If it's convenience, bookmark The Hangar. If someone doesn't like a well-established rule, make a feature-request on the main meta, which will probably end up status-declined (make your own site).

When I read "totalitarianism" and its offshoots, all I can think of is RT#M. The rules are there for very-well established reasons, and since I hope we can all take some criticism, let me just say everyone thinks they're funny and witty; sometimes it lands, more often than not it doesn't, and noise breeds noise.

It's gray, but readable:

In the top example, a moderator came along, reviewed the post, and did some house cleaning. It should be the end of it, and they should be thanked for it. Thanks @Federico.

I think I'll address a few misconceptions I see in here

1. Moderators can't magically transform a comment into an answer

Posting an answer is a serious undertaking, that someone posting a comment does not want to make. Moderators can't force this unto users, if they don't want to post an answer the best we can do is to encourage them.

NOTE: I think this confusion arises from knowledge of what moderators can actually do, i.e. turning answers into comments. This is rarely done, as the comment-in-answer after conversion has to be a good comment, or the conversion needed, and rarely these are true.

2. Moderators have to act as quickly as possible if there is no ambiguity

If all the answers are "no", there is no ambiguity, the comment can go and won't be missed.

I personally add a further question: "is it a joke that many will want to post?" even if it goes against something the previous moderators taught us. But if the community wants, we can go back to removing jokes as well.

3. Moderators are part of the community

Moderators are elected by the wider community to do stuff quickly and to enact policy. To do this moderators can access some tools that are unavailable to other users, but this does not cast moderators as outsiders.

Sure, with respect to the early days of the site there is less activity, but you want to see a chat that is "collecting figurative dust"? there are sites whose main chat has never been active, or where the last message posted by a user was months ago. Our channel still has some almost-daily activity, if you post there, people will see it and react to it.

If you know how to use it, that's the catch. If you want to propose a fundamental change to the rules of a community, and you pitch it to people that invested years into growing and shaping that community, you better have a good and well-formed case, or they won't be very receptive, and rightfully so.

6. There should not be many comments

That's why the system starts complaining after a certain amount of comments get posted under the same post. Except in very specific and exceptional cases, there should be very few comments under a post. Ideally none (after possible issues with the post have been resolved).

Seriously. Here's Meta Stack Exchange on it. It's worth noting that the moderator tools contain an option to remove all comments under a post and either delete them or move them to chat. If comment removal were really supposed to be rare, I don't think they would have given us a chainsaw. SE also autoflags any post with 20 comments (25 on Stack Overflow) or more (often results in comments being removed to chat). Moreover, once comment chains get too long, the comments get hidden. You can still view the undeleted ones... but how often have you found a useful post with 20 hidden comments and thought "Let's read all those as well"?

Comments are window dressing for posts. They can be used to ask for clarity, add information, or just converse with the poster. But unless they add value to the post, they need to go. That is the standard most moderators enforce.

Therefore, a unilateral deletion of comments that do not follow the suggestion is not warranted, unless of course clearly detrimental like spam, bad language etc.

Comments can sometimes act like a rowdy crowd at a concert. If it's disrupting the thing people are actually there for, it has to be stopped, or you miss the main event. I tend to be more lenient on Meta comments, but the main site needs comment curation always. If not, the commenters can hijack a post and sometimes wield undue influence over people reading said post.

Misuse of comments is called out, and it is pointed out that it is against the rule that is stated in grey. A Rule, or good practice on a question & answer site? Answer the question in the Answer section? Answering in the comments section should indeed be discouraged, however if done by mistake should be converted into an answer, not deleted.

1. Commenting The link to Misuse of comments states:

You should submit a comment if you want to:

Request clarification from the author; Leave constructive criticism that guides the author in improving the post; Add relevant but minor or transient information to a post (e.g. a link to a related question, or an alert to the author that the question has been updated).

Notice the use of the word should, which indicates a suggestion. The word must is not used here. Therefore, a unilateral deletion of comments that do not follow the suggestion is not warranted, unless of course clearly detrimental like spam, bad language etc.

2. Unilateral action by moderators before the community Should moderators step in?

When Rules are actually Suggestions, and when the consensus is that the community should decide first with moderation being hands-off as a last resort, unilateral deletion and closing is not warranted.

3. The Hangar and Meta The Hangar is collecting dust - clearly, we cannot see the use of this forum for open and friendly discussion anymore. Meta is declared useless: "..feature-request on the main meta, which will probably end up status-declined".

I very strongly disagree with OP's phrase on totalitarianism being in the #M.I could not find the particular question that was "misused" with a comment - if it was an answer, it should have been converted into one. I personally remain firmly pro contributing to a welcoming site that takes suggestions to heart, and considers mistakes as being honest.

Not the answer you're looking for? Browse other questions tagged discussion comments .

8
Should Aviation.SE allow answers posted in comments?
14
Does this site have a sense of humour?
8
Should moderators step in when there is a disagreement over leaving open / closing posts?

7
How should we deal with several now-obsolete comments from different users?
15
Can we please leave contructive comments for our new users, instead of simply downvoting?
9
Should we stop having extended discussions in comments?
8
Should Aviation.SE allow answers posted in comments?
8
Should bits of relevant information that are not full answers be allowed in question comments?
3
Why is the A220 cockpit seat question being considered a duplicate?
9
What is this community consensus on comments cleaning?
9
Why is the [md-80] tag being changed to [dc-9-family]?
5
Condescending comments and answers