Should missiles be on-topic?

Recently there has been an increasing interest in military topics. Normally, Aviation does include military aircraft. Since e.g. this question got 4 close votes, and other missile-related questions get nominated as well, the opinion seems to be divided on missiles.

There was a brief related discussion on Meta 7 years ago, but it was for a very narrow question. I'd like to ask a broader one: should we consider missiles on topic, as a subset of aircraft, or off topic?

For on-topic, I see the point that cruise missiles are, for many intents, aircraft. They have similar major parts, fly the same way, and for large cruise missiles, are designed and built in part by the same companies, and the difference from UCAV comes down only to reusability.

For off-topic, there's the counterexamples of Space and Drones SE. It also risks an increased shift of military topics here (which isn't necessarily bad), with how much role missiles play in modern warfare.

However, there is no Military.SE, which would be the perfect fit. As the Aviation SE has a number of combat pilots and aerospace engineers, at this point, it's likely to have the most missile-related knowledge on the SE network.

What is the community's opinion on this? Should we establish a guideline, or leave it case-by case?

While there are missiles that utilize aerodynamic lift, the most common definitions (Wikipedia) are:

With that in mind: 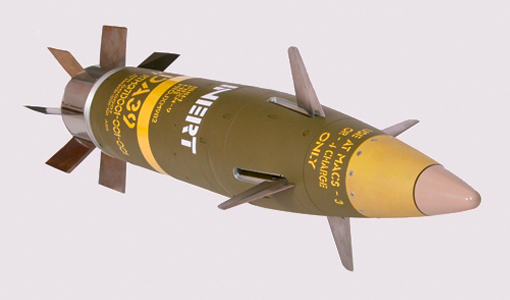 Cannonballs and [fancy] artillery shells (above) – despite being ranged weapons – I'm sure you'll agree are not aircraft and are not on-topic.

I'm with voretaq7's assessment from 7 years ago.

There are many topics that don't have a Stack Exchange site (yet), warfare is one of them, but it doesn't mean weaponry should be on-topic here just because a weapon is dropped from a plane or it has wings. Would the workings of a hydrogen bomb be on-topic? I'm also sure the answer to that is no.

➤ If the topic is about the lift or propulsion of missiles, then fine I suppose; otherwise (e.g. guidance, warhead payload, fail-safes, etc.), no.

There are lots of missile-oriented questions that should be on-topic for Aviation. Not necessarily EVERYTHING about them--being missile-related shouldn't immediately be grounds for the question standing, of course--but topics like

all seem completely valid. They're very closely analogous to the same issues on other aircraft, but intrinsically interesting due to the different design constraints proposed on missiles. For example, how do you electrically power a Sidewinder missile? a gas turbine feeding off the solid rocket motor core that runs at ca. 60,000 RPM (per Westrum's "Sidewinder" pp75 in my edition). That's just neat! There are interesting things to know about missiles that don't fit neatly anywhere else on SE except for Aviation.

I say leave it alone unless you have another community like Physics you can push it to, or objections other than it being about missiles.

Both rocket science and missile questions are accepted on our Physics site, with engineering questions about missiles accepted at Engineering.SE. The Space Shuttle and rocket sleds have a home on Space.SE. We don't do people a service by expanding our scope.

To be on-topic on Aircraft.SE the question should be aircraft related, and not somewhat similar objects that are not aircraft.

"An aircraft is a vehicle or machine that is able to fly by gaining support from the air. It counters the force of gravity by using either static lift or by using the dynamic lift of an airfoil, or in a few cases the downward thrust from jet engines. Common examples of aircraft include airplanes, helicopters, airships (including blimps), gliders, paramotors, and hot air balloons.".

So, to stretch things: A lighter than air missile or one with large wings would be an aircraft, otherwise it isn't.

Not the answer you're looking for? Browse other questions tagged discussion on-topic .

8
Are combat flight and military aircraft on scope?
3
Why was my question closed as off topic?
5
How specific to weapons is too specific to weapons?
11
Why is this military related question considered to be off-topic?
6
How narrow a definition should this site have
5
Do we need to review our "on topic" list?
1
Should we have a tag for ideas about safety improvements?
7
How can we best tackle the reviewing discrepancy?
9
Should we allow questions which are likely answerable by the experts here, but are not directly related to Aviation?
6
The reason tags become vague, and how we can fix the issue